The Jon Alsop I Know

Today is Jon Alsop's funeral.
It's simply too soon for such a great human, business partner, sales person, and friend.
My first recollection of Jon goes back to my early days at Advertising.com (late 2000). Jon stopped by my desk asking for help with his client, Snap-On Tools.
We ended up creating a Father's Day campaign that was a first in the industry and a big deal for the business considering business environment at the time. Jon and I traveled together to Kenosha, WI to visit with Snap-On. In the meeting we were presented with signed books from the CIO as well as the most popular Snap-On multi-use screw drivers. It was a classic. Orange handle. I still have mine. With Jon's passing it takes on a new meaning.
My experience with Jon on this client and many into the future allowed me to see him in action. He was an amazing sales person. His ability to connect with clients and become a trusted partner was second to none. I'm sure that many of his past clients will be disappointed to hear the news of his untimely passing.
Jon was a friend, he was always there to help out. When I bought a row house and decided to gut it myself he showed up and helped rip the place apart. One of my favorite photos is below. 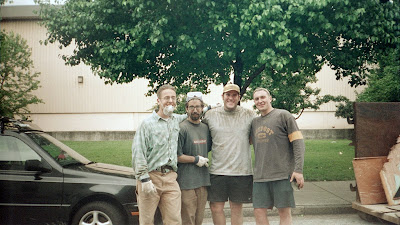 Next thing I knew it I was buying and rehabbing row homes with Jon and John Demayo. We spent many hours together at night and on the weekends. While the work was exhausting it was a blast rebuilding these homes with Jon. We had many great experiences, whether it was working in sub zero conditions, hanging off ladders, having a brick wall collapse on us, or just hanging out after a long day of hard work.
Jon saved me from certain death or at least extreme bodily harm one day on my own row house. I had climbed up on a ladder to caulk some cracks in the bricks. While two stories up I fell off the ladder and found myself caught in cable and phone wires. Jon remained calm and helped me get back down to the ground safely. At one point he was planning on catching me, luckily we figured out another solution.
Jon was that kind of person, he was willing to try and catch me even though it would have put him in peril.
Jon was the first of my friends to meet my future wife. Diana came over in the morning with coffee after we had been banging nails for a few hours in the bitter cold. Being the natural sales person he sold me hard.
Jon I owe you big time.
It's not surprising to see the outpouring for Jon over the past week. All the photos, stories, and memories shows the impact he made on this world. He won't be forgotten. There must be bigger plans for him, there has to be because his life was cut too short. He's given life to others with his organs and I know he's really proud right now about that.
Jon we'll catch up in person on our next row house rehab in the afterlife.
Posted by Rob Deichert Jr at 3:00 PM

Good post rob. I remember working on one of your houses with you guys. I don't remember what we were doing but I remember Jon outside painting some floor trim and the three of you bickering about who did the most work on the house. It was a funny scene. And the story about you falling into the phone lines is classic.

Jon was a good friend. When I had several deaths in my family that struck at once he knew I was struggling to make sense of it and he took me out to dinner to talk through it with me.

He was truly an incredible person and I will miss him.

I remember the SnapOn campaign - I sent the enewsletters out. It was such a pain in the butt... but anything for Jonny A!

He really was amazing. It's still so hard to believe.

Hey - I was a former prospect of Jon's, and he came to Iowa to visit me and my company in a terrible blizzard and lost all his luggage. I was looking up Ad.com on the Internet for an advertising lecture, and then, thought of him and google'd his name. How did he pass away? I am stunned...

He was the NICEST guy. I became friends with him, like instantly! I could never close any deals with him due to my dumb clients, but would have loved too. I just tried to join his Linked IN page.

Rob- Found this post today (2nd anniversary of Jon's passing). I echo you sentiments. Two years on, I can't believe he's not here with us.