I was pulling a few books from Amazon to recommend and noticed the page saying, "Upgrade this book for $2.29 more, and you can read, search, and annotate every page online"
Further investigation resulted in this screen shot - 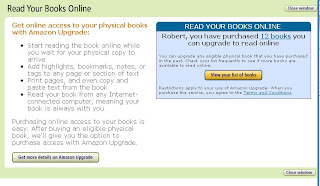 Interesting to see Amazon offering this, but what about paying a slight upgrade fee to give me Kindle access to existing purchases? I've blogged about this idea before. Either way this is a great scalable way to to generate incremental revenue with almost no physical distribution costs. I wonder what the economics are with the publishers.
I'm sure there are some rights issues, but the reality is that with this solution or Kindle upgrades there is still the potential that I have sold the book on the secondary market. The only challenge is that most books depreciate rapidly after purchase.
Posted by Rob Deichert Jr at 9:49 AM

Fall Feeding For The Bees

Today marked 21 days since I put the Formic Acid pads on a few of my Varroa infested hives, thus off they came. It's also starting to get cold and the hives need to be prepared for the winter.
I installed the entrance reducers on all of the hives as well as put on the top feeders so I could get 2 gallons of 2:1 sugar water into the hives. It's critical to feed the bees Fumagilin-B to avoid the human equivalent of a cruise ship getting one of those stomach viruses and everyone encountering severe intestinal distress. The honey bee equivalent disease is called Nosema.
Mixing up 13 gallons of sugar water (2 gallons per full hive, 1 gallon for my nuc) takes give or take 100 pounds of sugar. Normally I picked up 25 lb bags at Sam's Club, this time they were all out so it was 10 ten pound bags. Below is photo of my sugar posing with Fumagilin-B medication. 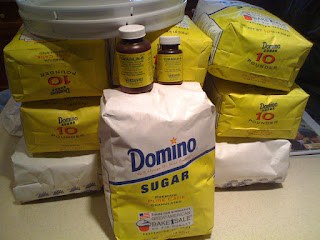 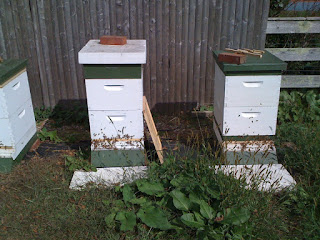 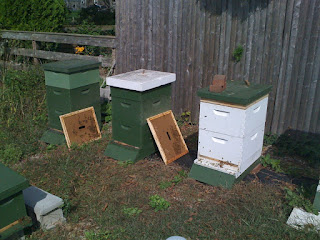 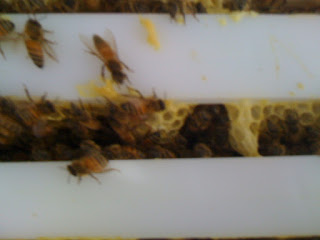 Capitalism: A Love Story - Something every capitalist needs to see

Today Diana and I spent two hours watching Michael Moore's new movie, Capitalism: A Love Story. While I believe in capitalism and this film is against it, most people like me will probably write it off.
DO NOT. Go see it.
What I took away from the movie:
1. The Political Donor class is in charge - this is the ultra wealthy who lobby government to the benefit of enriching themselves. Michael Moore cites FOA, "friends of Angelo", key political figures who got sweet loan deals from Countrywide. Special deals for special people. This is but one example and it touches some key political figures, the very people who were supposed to be watching out for the public.
Want to read about how the tax code is cheated by the super rich - read Perfectly Legal: The Covert Campaign to Rig Our Tax System to Benefit the Super Rich--and Cheat Everybody Else

2. Mortgage Fraud an insider's job - citing the FBI's 2005 report, "Based on existing investigations and mortgage fraud reporting, 80 percent of all reported fraud losses involve collaboration or collusion by industry insiders."
Beyond insiders committing fraud, nobody was really looking out for the borrowers. Sure it's America, buyer beware, but be reasonable, not everyone is financially savvy. I'm sure it's possible when a loan officer is looking at a couple thousand dollar commission on a loan, he/she might not be completely level with the borrower. Next thing you know their floating rate has lead to foreclosure.
3. Obama received a lot of money from the investment houses who were bailed out or benefited from the bailout; almost a million from Goldman Sachs alone.
4. Michael Moore makes the suggestion that the reason why Americans haven't revolted against the rich is because the general public is lulled into the thought that they too can be rich some day. Maybe that's so, or maybe they don't notice the money being siphoned off slow and steady.
He wants democracy to replace capitalism, I'd like to see democracy back to help change our cronyism back to capitalism.
We need to put the regulations back in place that can level the playing field. Much of the great wealth in this country has been generated by men and women who have leveraged people educated by the US educational system and our infrastructure.
Our system relies on taxes to fund grants and research - the same taxes many ultra-rich seek to avoid. It's fine to be successful and become rich, just make sure you are paying your fair share.
At least in this country you probably won't be kidnapped or have your company nationalized, at least not right now.
Posted by Rob Deichert Jr at 6:33 PM