Saturday I was walking around the in-laws property and noticed a lot of bees flying around a section of the privet hedge.
Hmm, that's odd there are no flowers there.
After closer inspection I thought I had found a swarm, but it was a hive that had formed in the hedge. This would explain why my father-in-law was chased by the bees when he was mowing. Normally bees won't come after you if you're not near their hive. He clearly was near this hive.
By the look of things this hive was there for a few weeks, you can see in the pictures there was sealed brood.
First step was to get the hive out of the bush and into a hive body. Only problem was that all of mine are in use. I had a few boxes kicking around from my father's beekeeping days. Took a bottom board and hive body, fired up the propane torch to "toast" the inside to kill any latent diseases and they were put back into service. As you can see from the pictures I don't have a proper hive top, a simple piece of plywood would have to do.
I placed the wild hive in the box, hoping they'd start building out the frames. That lead me to build some bee swarm frames from plans I found on the Internet. I built six of them and then went to work on Sunday placing the comb into the frames. The wild hive was designed to hang off the bush not lay sideways.
Of course another swarm showed up yesterday, thanks to some family help they are sitting in a Nuc hive right now.
Posted by Rob Deichert Jr at 7:00 AM

Time to setup my queen castle

Came out this Friday to find hive #4 covered in bees. Sure it was hot outside, but there was just an inordinate number of bees compared to all the other hives. Since I needed to refill the feeder I opened up the hive and sure enough I found over 8 sealed queen cells. (Below is a picture of an empty queen cell from earlier in the season.) 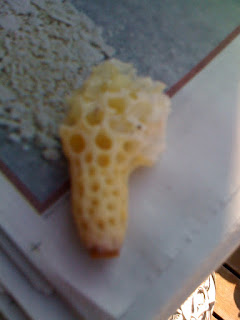 Perfect opportunity to try out my queen castle from Brushy Mountain. All four bays are now filled with a frame of brood and a queen cell or two along with a division feeder. Now I wait and in two-three weeks I should find four matted queen bees.
I wasn't able to find the queen in hive #4 so I'm not sure if she's dead or left with a swarm. I'm not too worried as the main hive still has a few queen cells. We'll have to wait and see how this all turns out. 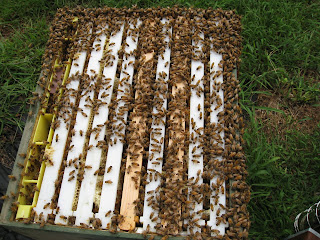 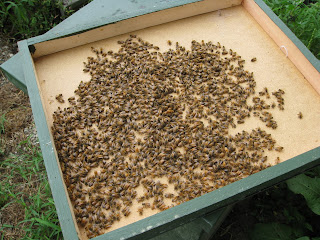 Honey bee and a crazy caterpillar


Snapped some nice shots on Saturday of a few honey bees all over the mint in the garden along with a crazy looking caterpillar.
Posted by Rob Deichert Jr at 10:15 PM

Email ThisBlogThis!Share to TwitterShare to FacebookShare to Pinterest
Labels: investing

Saturday marked 21 days from when I originally put in Pierco plastic drone comb frames into three of my hives. I pulled them and sure enough the swarm hive had built them out the frames in a normal fashion. I took a few pictures before I placed them in the freezer to kill off any drone brood and Varroa mites hiding out in those cells.
Notice the honey for the drone brood with the white cappings on the upper edges. I replaced these frames with new blank Pierco drone frames to be switched in another 21 days. 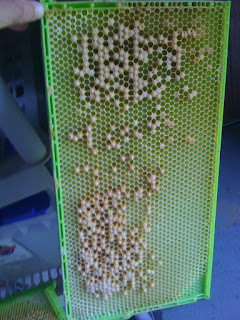 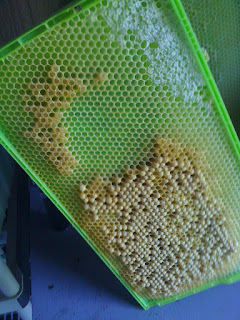 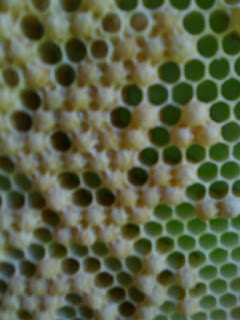 While I was helping out with the Cole Haan gift bags, the event was rocking. There were a ton of people and everyone seemed to be having a great time. This year was bigger than last, can't imagine what next year will bring.

Did get a chance to chat with Nelson DeMille, one of my favorite authors. Looking forward to the Lions Game sequel.

Below are some photos, from Keri Lamparter the PR maven.

Heche at Authors Night at the East H... on Twitpic">

I'm sure their planes are already nicer than flying commerical

Great article in WSJ.com today - "Lawmakers' Global-Warming Trip Hit Tourist Hot Spots"
While I won't debate the educational value of these trips, I will point out the following:

It's tough to calculate the travel bills racked up by members of Congress, but one thing's for sure: They use a lot of airplanes. In recent days, House of Representatives members allocated $550 million to upgrade the fleet of luxury Air Force jets used for trips like these -- even though the Defense Department says it doesn't need all the planes. - WSJ

Sure maybe it's stimulus money, or maybe the seats are comfortable. Why not invest in something that builds future capabilities of the country.
Posted by Rob Deichert Jr at 7:42 AM

Having a drink with my bees

After swimming a few laps this afternoon I lounged out for a cold Red Bridge Beer.
Who comes along?
One of my bees, to drink the pool water off my foot. What's amazing is that she came back 5 times and brought friends.
Posted by Rob Deichert Jr at 10:33 PM

offer (a follow-up to an earlier post on the Kindle 2):

Hardcover plus Kindle Version: My wife helps organize the Authors Night book fair in East Hampton. It would be great to get a signed copy of Bob Caro's book and get the electronic version to read it.

A real progression indicator: How close are you to finishing based on the book, not the appendices. I recently read The First Tycoon

, and the book essentially ends at the 73% mark. I could feel the book winding down, but kept seeing the percent read not making sense.

Email ThisBlogThis!Share to TwitterShare to FacebookShare to Pinterest
Labels: Kindle

Moving the swarm nuc into a full hive

Finally got a chance to upload the photos I took last weekend. You'll see below the swarm nuc being moved into a full hive. The swarm is doing amazingly well.
Posted by Rob Deichert Jr at 1:54 PM

For some reason my blog post, How to use an air conditioner and not destroy your steel casement windows, was one of my most popular via SiteMeter.


Below you'll see some metal twist clasps that are spaced off the Plexiglass with some metal washers. The nut is attached with Loctite Threadlocker

to prevent it from loosening up with use. 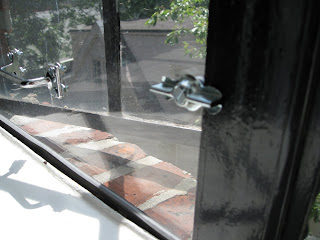 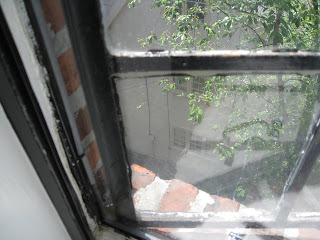 The handle of the window is held with the eyelet bolt and tightened with a wingnut. 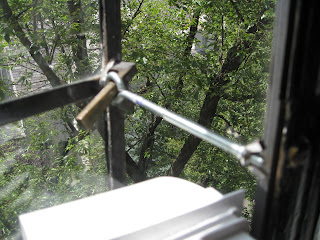