I've read about the small hive beetle and their devastating effects on honey bee hives, but always assumed they were limited to the south. A few weeks ago I spotted a few in one of my new hives. I didn't see any of the larva, but the beetles scurried around until I smashed them with my hive tool. After researching my options, some of which included vegetable oil filled trays to trap them I found out that there are specific nematodes that attack the SHB.

This morning I applied Heterorhabditis indica nematodes purchased from Southeastern Insectaries in a watering can around my hives. It'll be interesting to see if they combat the SHB life cycle.

The actual nematodes come shipped in a Styrofoam cooler and they are suspended with that gel you put in flower pots to provide moisture storage. In the bag below there are about 5 million of the nematodes that specifically attack the SHB. I had some difficulty in actually counting them to make sure I wasn't ripped off. 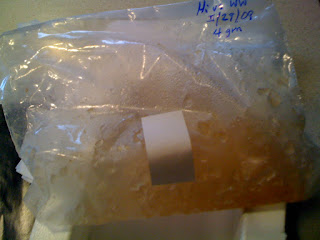